Eclipse is a popular open-source integrated development environment (IDE) with support for Java, C/C++, PHP, and a host of other programming languages via an ecosystem of extensions.

You can use Eclipse with Birch, too. A plugin is available for syntax highlighting of Birch code. Birch projects can otherwise be treated as if they are C/C++ projects, with only a few minor changes to settings as detailed below. Error messages from the Birch compiler are understood by Eclipse, so that it is able to annotate problem lines of code and allow quick navigation to them. This can help streamline workflow. 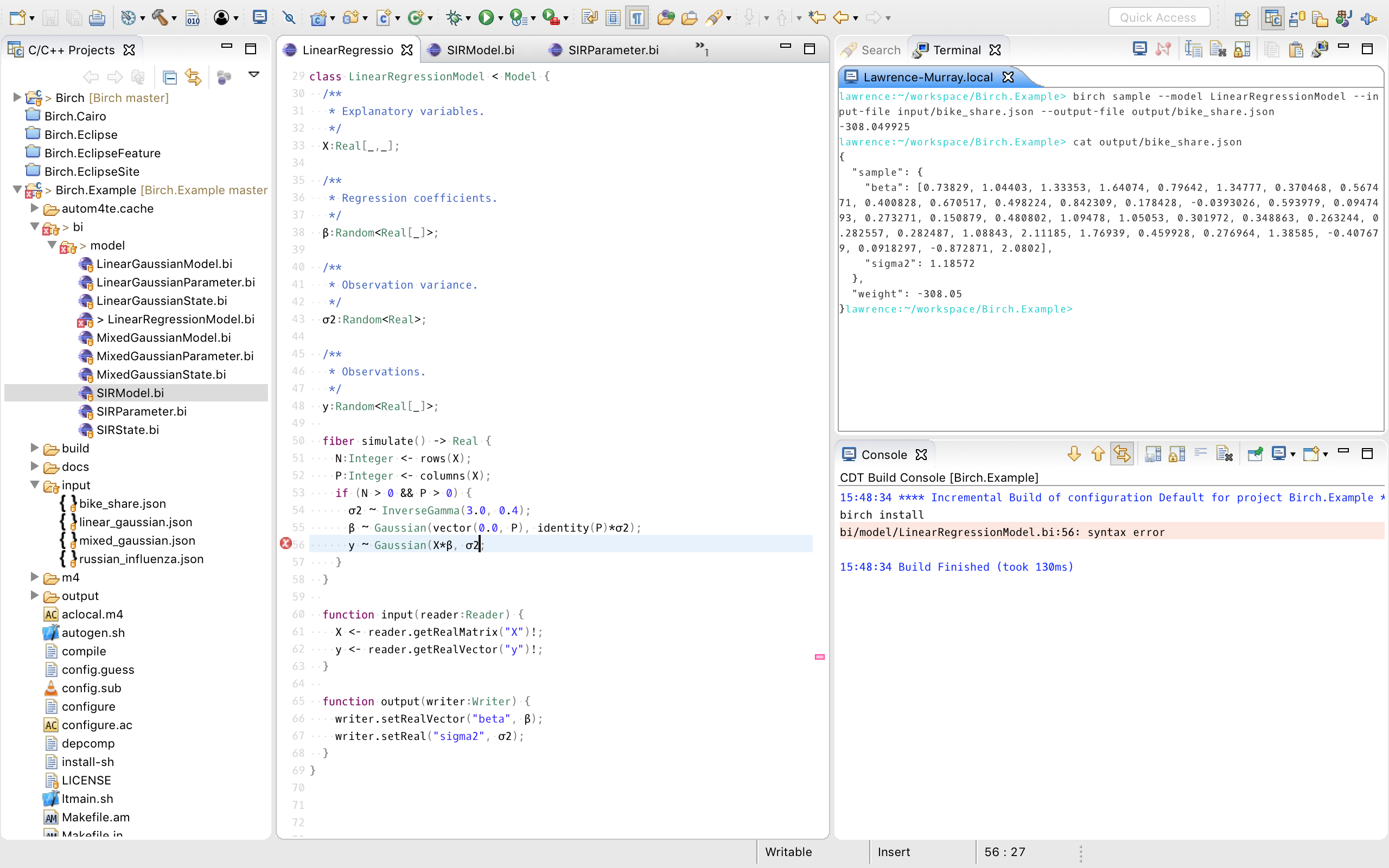 When installing Birch itself, use the following commands:

The reason for the INSTALL variable: when building a project through Eclipse, it will also rebuild project references, which includes Birch itself. This prevents installation of files that have not changed, which would otherwise have their timestamp updated, which in turn would trigger unnecessary rebuilding of package files. When Birch is building packages, it already does this, so you only need to do it for Birch itself.

You should install the Eclipse IDE for C/C++ Developers linked from here.

On Ubuntu, install Eclipse through the Ubuntu Software Centre, not through apt-get, as the version in the latter may be very outdated.

To install the plugin, use the Help > Install New Software... menu item from within Eclipse. Click the Add... button and enter the following update site URL:

Select the plugin from the list and follow the prompts from there. The plugin should be automatically associated with the *.bi file extension.

While optional, another useful plugin is TM Terminal. This allows you to open a terminal from within Eclipse. You can then run birch within this terminal instead of an external terminal, staying within the one environment as you work.

To install TM Terminal, use the Help > Install New Software... menu item from within Eclipse. Click the Add... button and enter the following update site URL:

Select to install the TM Terminal item and follow the prompts from there.

Also on macOS, the terminal is not configured with the same environment as the Terminal app, so that trying to run birch may fail. To fix this, open the Eclipse > Preferences menu item, go to Terminal > Local Terminal on the left, and enter arguments of --login.

Once TM Terminal is installed, you can open a terminal window by using Window > Show View > Other and selecting Terminal. When the empty terminal window appears, click the Open a Terminal icon on the right side of the toolbar and choose Local Terminal to open a new tab with a terminal.

Within Eclipse, you can treat Birch projects as if they are C/C++ Makefile Projects, with a few tweaks to the project properties as outlined below.

Once a Birch project has been created from the command line with birch init:

You can then use the Project > Build menu item, or keyboard shortcuts, to build your project.

It is worth importing the Birch compiler and standard library into your Eclipse workspace as well, to establish them as dependencies of your own project.

Use the File > Import menu item from within Eclipse, then:

Once the projects are imported, go to the properties for your own project, select Project References on the left, and choose Birch.Standard.

Now, when you build your own project, Eclipse will automatically rebuild Birch.Standard and, in turn, Birch, if necessary.

Note that, unlike when creating your own projects, it is not necessary to modify the project properties for the Birch compiler and standard library. The repositories already include Eclipse project files with the relevant settings.

First, set up your terminal for use without root access following the how-to guide here.

Then, within Eclipse, go to Preferences > C/C++ > Build > Environment, add a variable BIRCH_PREFIX with value ${HOME}. This will apply to all projects, which is probably what you want. Alternatively, if you wish to do this for particular projects only, use Project Properties > C/C++ Build > Environment for each of those projects instead.